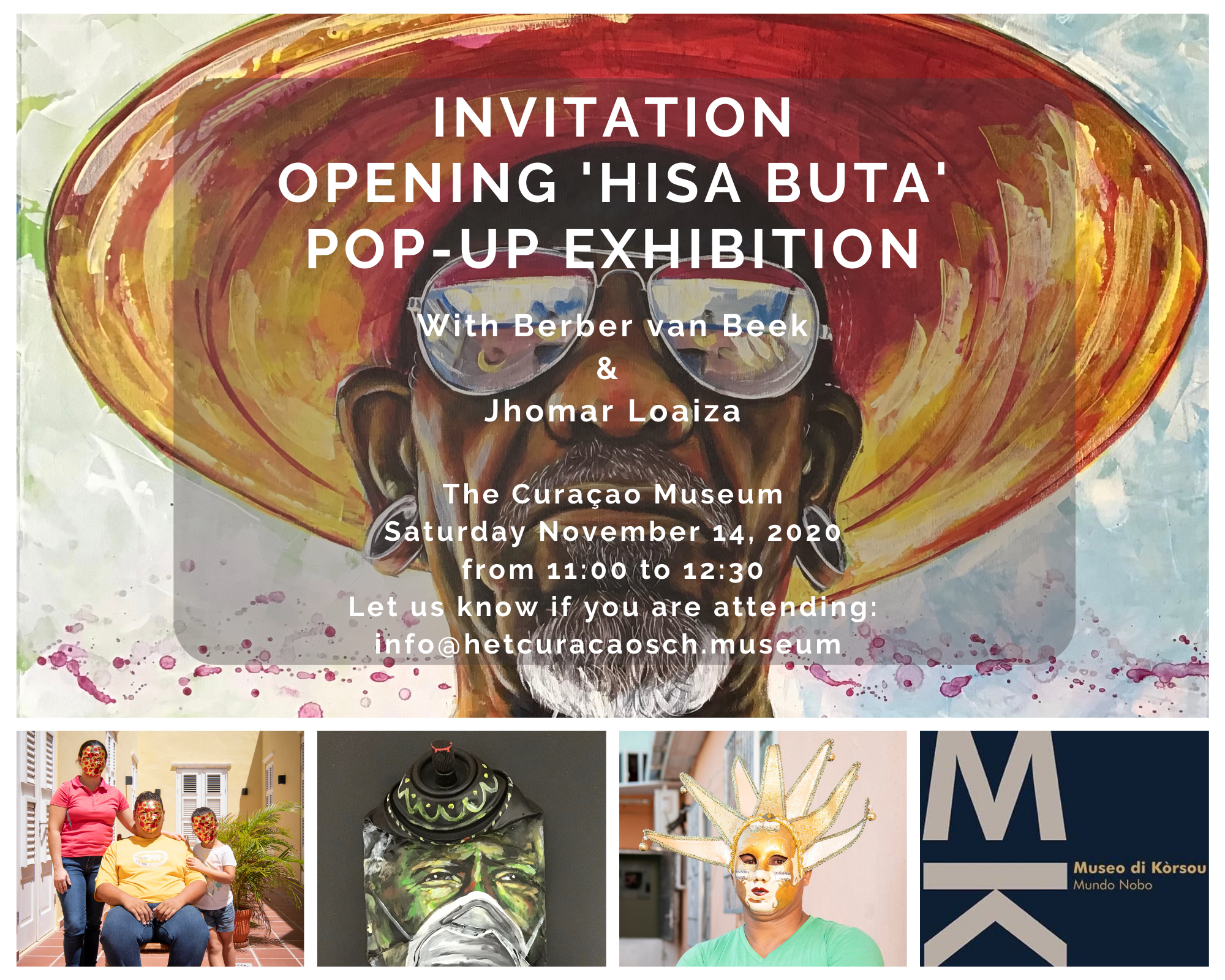 Dear Friends of  The Curaçao Museum,

You are cordially invited to the the opening of our next ‘Hisa Buta’ Pop – Up Exhibition on Saturday November 14, 2020 from 11:00 to 12:30 in The SNIP Gallery at The Curaçao Museum.
It has been a while since we organised a Hisa Buta Exhibition! But we are back again. These Hisa Buta Pop – Up Exhibtions hold a very special place in our hearts, because with these Hisa Buta Pop – Up Exhibtions The Curaçao Museum offer ‘Emerging Artist’ a platform where they can show their art, get to know more people in the field, get more attention in the media and be seen by the general public!

The Curaçao Museum started with this project back in 2017 and approached Avantia Damberg as our ‘Head Hunter’ to go get us these ‘Emerging Artist’ and we must say she has done a great job of this because we have ‘two new kids on the block’ with very exciting work!

Please find below an introduction of these very promising artists and and will you let us know if you are coming please? In this new normal we have very limited attendance to our Echibition Openings. We are sure that you understand!

The exhibition will be on show till January 30, 2020 and will be ‘growing’ in the meantime.
Read all about it below!

ART POWERED by The Curacao Museum!

Berber van Beek is an all around photographer and owner of Studiorootz – photography.
Projects concerning durability, sustainability and awareness campagnes have her special interest because next to her commercial assignments, she wants to make people aware of the
environment- , and social – societal themes.
With her projects she aims to bring a closer connection between the community and it’s environment in order to bring betterment for people, cultures, communities and the environment.  Berber has great affinity with vulnerable groups. Berber is participating in this ‘Hisa Buta’ Pop-Up Exhibition with a series of photographs from her project ‘Hidden voices of undocumented Venezuelans on Curaçao’.
With this series of photographs she offers them a chance to voice their personal experiences and to be heard by giving them a voice in the media. These photographs together with an interview of the subjects, appeared over a period of time the newspaper ‘Antilliaans Dagblad’. These are men and women, students and professionals are forced to live in the shadows of our society. Berber hopes that this project will change hearts and inspire support for those displaced and living in hiding by bringing attention to the individual stories from these hidden voices.

In the coming months, starting in December 2020 until January 2021, Berber will continue with this project! This means that every month one or two new photographs from Berber will be added to the
‘Hisa Buta’ Pop – Up Exhibition! These photographs will appear first in the AD (Antilliaans Dagblad) after which they will be added to the exhibition. We will keep you posted of each new addition to theExhibition!

Jhomar Loaiza has had artistic inclinations since he was a child. He recognizes teacher Ángel Sánchez, resident of La Vela, one of the first people to teach him painting techniques among many other artists who have provided important advice for the development of his work.
Loaiza is defined as a self-taught artist, given that his training during his time at the Tito Salas School of Plastic Arts, was very short in 1996.
Jhomar has won quite some painting awards his first one in 2004 obtained in the Salon of Novice Artists and the last one in 2016 where he won 1st prize at the XVII Salón Churugura.
He also has been awarded different distinctions for his contribution to the Arts in the Falcón state. He has also represented Venezuela, in countries such as Mexico, Curaçao and Spain.
Currently  Jhomar resides in Curaçao, where he has made a significant number of murals in different parts of the country to name a few: in Punda, Otrobanda (Kaya Kaya Street party)
in Barber and most recently at Sentro Deportivo Kòrsou (SDK).

In the Hisa Buta Pop – Up Exhibition Jhomar will exhibit some various interesting paintings of Curaçaoan People of Afro Caribbean descent as a special homage.

Drop in and get to know Jhomar and Berber a little bit better and be inspired by their work!